The Ice Elves of Afarwaha are a unique elven culture, as they mix typical northern features with typical elven ones.

Living in a land of harsh climate, there are several unusual features among the Ice Elves not seen among elves elsewhere. The most visible one is that fur is a common clothing, especially in winter. While elves in general are not beyond wearing leather or other animal parts at all, fur is not common in the other, more southern elven cultures.

The most unique feature, however, are the mines. Nowhere else in the world do elves operate mines, but the climate in the north makes metal essential. Unlike dwarven mines, elven mines are fairly simple and shallow, but they do produce good ore, as the elves follow only the best veins, ignoring others. While the volume of ore produced from such mines is lower than that of comparable human or dwarven mines, the quality of the ore is excellent.

Culturally, Ice Elves are traditionalists. They greatly treasure the elven ways, and even where they mix with humans, they never give up their own culture. They are, first and foremost, elves.

Also see the generic Elf page on features common to all elven cultures.

Along the northern coast, the Ice Elves are a naval culture, just like any other people living at the shore. They are, however, one of only two people in Auseka who have mastered the carvel building of ship hulls. 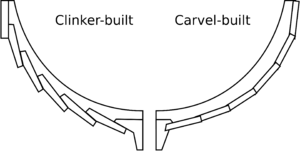 Carvel-built ships are lighter and faster than the older and more common clinker-built ships. They require more advanced woodworking techniques, as the planks must be fitted exactly and the gaps between them must be sealed properly. With the Ice Elves being excellent woodworkers and their shipwrights having hundreds of years of experience, on average, mastery of this type of building has been a staple of the Ice Elf shipyards for a few hundred years, and a secret that they guard well.

The coast, especially the eastern coast of Afarwaha, being as rough and unpredictable as it is, Ice Elf ships are not famous as trading ships and Alduwai and Gisnes are the only major ports of the realm, the second one being run by the large human minority of northern Afarwaha. Along the eastern coast, there are trading ships doing irregular routes, but most ships built here are for fishing, for expeditions or for piracy. Ice Elf pirate ships are feared further to the east, along the northern Schap coast, where they prey on trading vessels.