The material on this page is intended to be given to players.

These maps are ready for handout. They contain no secrets or spoilers, are in a style that is suitable for in-game content, and most of them contain typical omissions, inaccuracies and flights-of-fancy of maps drawn from travel reports and other hearsay. 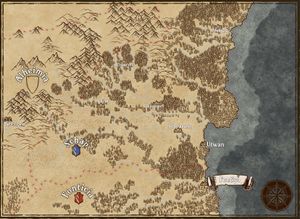 A map of the border region between Schap and Fonticia, focussing on the Schap part of the border. Contains only the major cities and has some inaccuracies going into Alheimia and when it comes to the rivers. The map is mostly accurate regarding the location of the cities and the forests and mountains, though it is too rough to be used for local navigation. It also does not show any roads.

Most suited to a party playing on the Schap side of the border in this area. 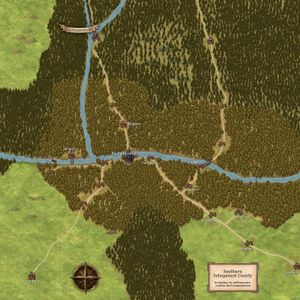 Map of Schaperach County south of the Wachetbury river. This is a fairly accurate map, but lacks names for smaller settlements away from the main road between Kymera and Schaperach. It also contains a road to Paidwar and a ruin at the forest edge near that road, both of which don't actually exist. The Convent Heinrich is placed closer to Semwald than it actually is, and a few such small details. But in general, the map is both accurate and correct.

Also check out the following pages, which include local maps of places: